A more common theme and demand arising within the WEM space now that its gained such a large amount of traction, is the ability to handle multi-site or multi-region Folder Redirection (USV) and Profile locations within native WEM configuration. At first glance this can appear to be more complex than it actually is, so I spent some time documenting some basic guidance using a completely “Within-WEM” configuration. A couple of key reasons that I had typically not utilised WEM for folder redirection on many projects were:

The example that I have written up below focuses on Folder Redirection, the same principals apply to Profile Management however given how and when UPM settings are processed, your options are not as flexible, and you are best off reading through Carl’s guidance here, and applying it to your WEM policies.

To clarify this, Folder Redirection is processed in the user context post logon via WEM, UPM Processing happens as part of the logon, to get your profile in and going. Folder Redirection can thus utilise environmental variables processed and set by WEM To set the scene, I have the following setup and basic requirements in my lab scenario

Typically, if we were driving folder redirection via GPO, the solution is simple – a policy per OU and away we go, however with WEM there is a few more touch points, which ultimately provides you with more flexibility

As I mentioned above, I have an existing DFS Namespace that covers my organisation. I am not getting into the Replication debate here, simply DFS-N configured as a single access namespace. Assume that each folder is targeted to an individual server.

Truth be told, its currently pointing to two as I am not nerdy enough to have 4 file servers in my lab. As such, Server 1 houses Sydney and Melbourne Data. Server 2 houses Perth and Brisbane Data. But you get the point

This is not rocket science what we are trying to do here, but it’s important to understand how and why this is possible within WEM.

In our scenario above we have 5 variables we need to create. Each one of these will basically set the location of where we would like the user’s data to land.

I have called the Variable %FolderRedirLocation% you can call it whatever you like… Mary, Barry, Steve, Fred… whatever suits.

I have created 5 objects within WEM, creating 5 variables with the same name. Confused? Read on.

Each of the on premises site-based variables are configured as follows: 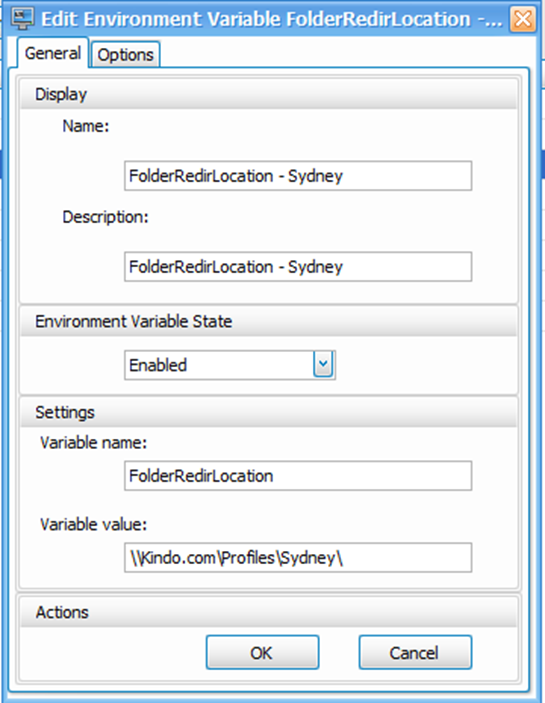 The execution order for these is left at the default 0. I am going to be filtering them shortly, so I don’t care what order they are executed in 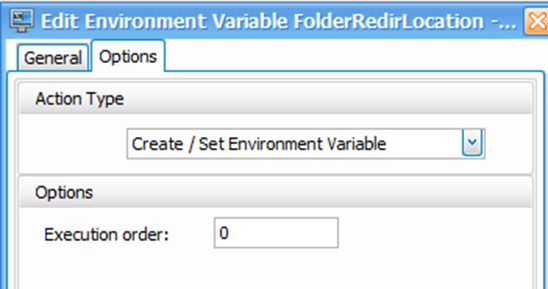 The OneDrive Variable is configured a little differently, I am actually setting the location of the variable to the local Sync Client found on the local machine. In my example below, my corporate OneDrive: %UserProfile%\OneDrive – Computer Systems Australia Pty Ltd 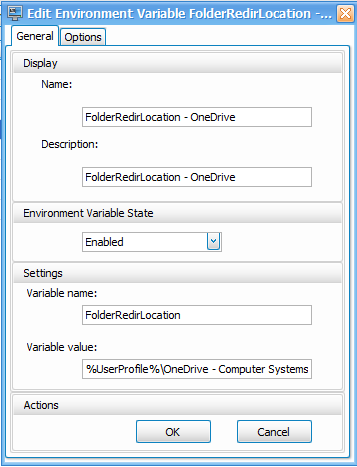 Note here though that I change the execution order to 1 as I want this to process AFTER my initial variables do. I will have some logic to check things added shortly

I think its best at this point to understand that what we have done is built some variables, nothing else. They aren’t assigned, they are simply objects. If we now switch over to the WEM USV Configuration, it’s easy to keep a track of how this fits together.

My configuration paths have been aligned to my Environment Variables. Note that you are probably all smarter than I am, but years of doing this with a \\Server\Share mentality caused me headaches when using Environmental Variables at the root path. Windows expands these natively, so %FolderRedirPath% = \\Examplelocation whereas \\%FolderRedirPath% is nothing of use

Note that I purposely mixed and matched the variable use above with a combination of Native WEM and Native Windows variables. This is to prove there is no set way to do it, and you can choose whatever makes you happy.

The result here, is that once the variables are correctly set, the pathing should expand to something like below:

You get the drift

WEM is ridiculously awesome as far as fine-grained filtering and conditional assignments, in this example I am going to do a very basic configuration, targeting an OU location, however the world is your Oyster as far as fine graining this stuff.. You can add location attributes in AD, you can do client name detections, address ranges etc. You can make this is as simple or as complex as you need to with multiple conditions.

As you can see below, I have a very basic structure setup in Active Directory, breaking my users up regionally.

I also have a single group configured for WEM assignment purposes, you don’t need to do this, you can use any of your existing Groups 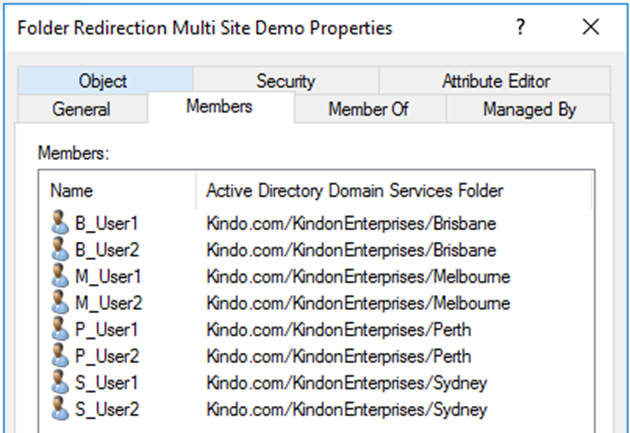 Within WEM, Under filters -> conditions I have created 5 new Conditions 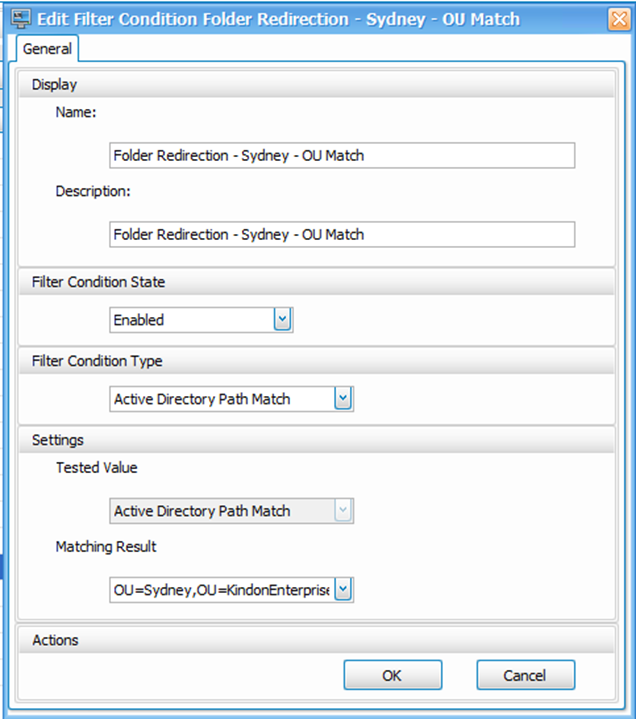 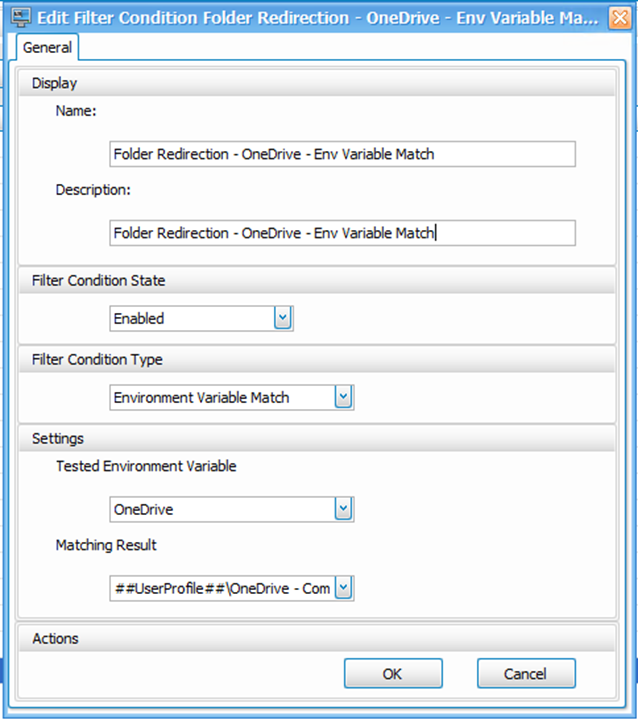 Now that I have some conditions, I need some rules. Rules are used when assigning actions and contain one or many conditions with an and logic

Under Filters -> Rules I have created 5 new rules

Four of these rules will be used for my on premises users and are configured as below. Note that each rule should be named in an easy to read fashion for when you carry your assignments, conversely, I find it helpful to name my conditions very descriptively for the same reasons 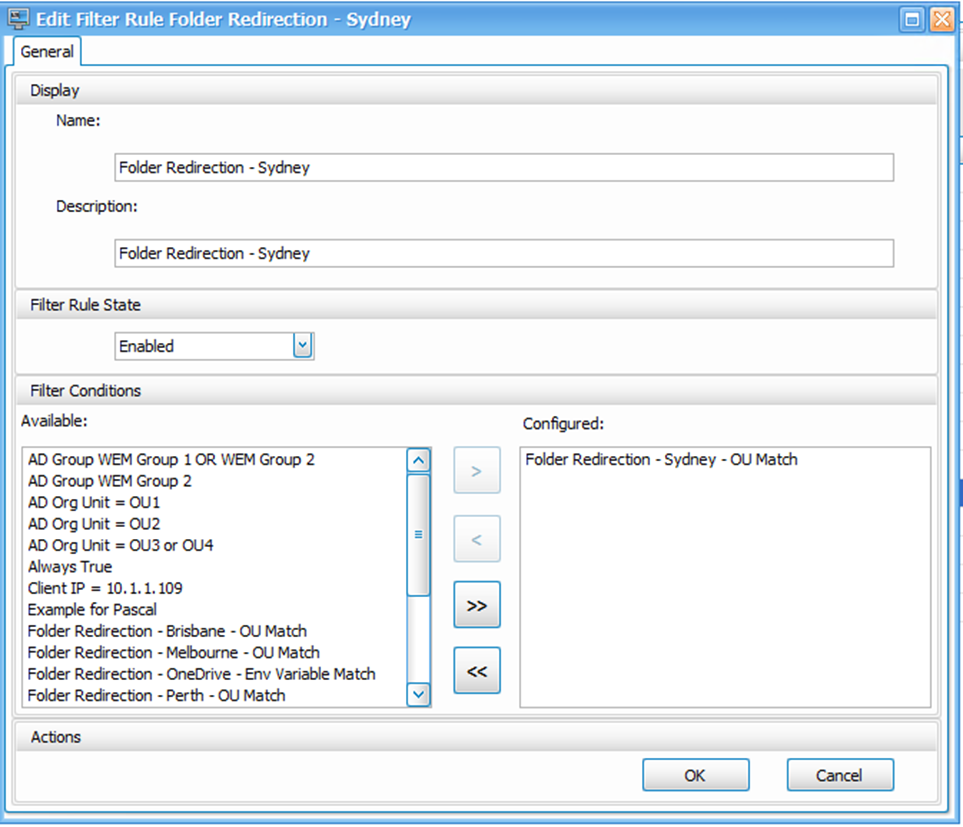 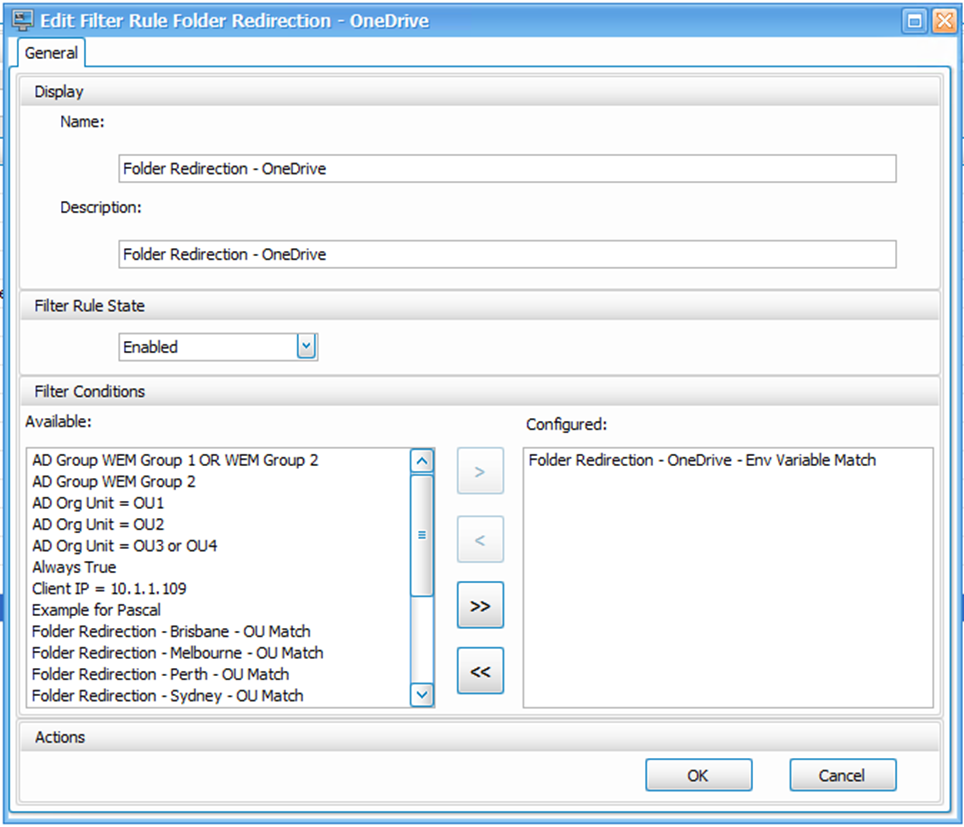 Now that everything is configured, we simply assign our Variables to the control group of choice, and filter each assignment with a specific Rule

Mapping the process out

Now when the users sign in, the process is as follows.

WEM Checks for assignments and processes the environmental variables, setting it for the user.

The example below shows a user with both a Sydney and OneDrive Environment Variable set.

Note that due to the execution order, my user who is Sydney based AND has OneDrive, now maps to OneDrive based on his Environmental Variable.

In the next example, I have disabled the OneDrive Variable check, effectively simulating the same user without OneDrive in the mix.

Summary and Things to Note

For a long time now I have been perplexed about some of the other behaviours associated with Folder Redirection and WEM, to the point that I simply don’t include it in most of my deployments, and leave things GPO driven. My biggest challenge was the refusal of WEM to ever self-heal folder redirection if for some reason the redirected folders were altered, or there was a problem of some sort that required manual interaction with the redirected folders.

Update: this is not just limited to WEM it would seem, but is a native issue with GPO driven Folder Redirection also.

There were two actions that would resolve the issue

Digging in to the support article here it is noted that you can delete the entire HKEY_CURRENT_USER\Software\VirtuAll Solutions\VirtuAll User Environment Manager\Agent\ Key which effectively removes all of the users cached actions for WEM, and the tracking of what’s been applied at the user level.

Digging in a little deeper, we can see there is a specific key which relates to the processing of folder redirection, this specifically is the UsvUserConfigurationSettings Key, with a sub key identifying the user via its GUID. 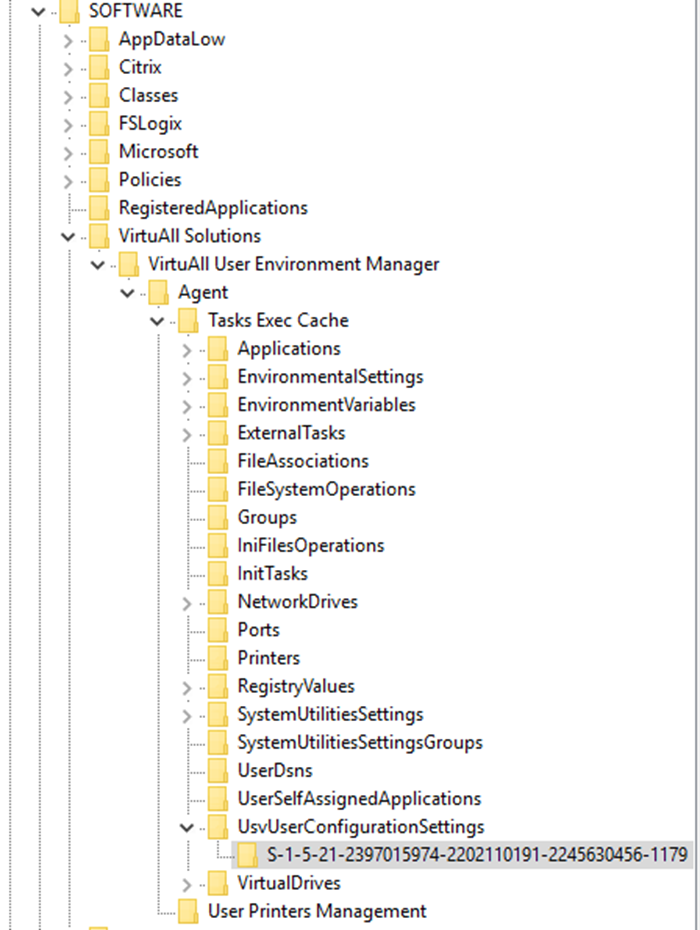 As such, rather than kicking the entire cache key itself, simply removing the GUID Sub key below forces WEM to reprocess USV settings, and we have our folder redirection self-healing back in action. Problem solved.

I would suggest that this is a little flaw in WEM processing, and that it should be checked and processed on every pass – maybe there is an option somewhere for this hidden away, I am not sure.

I also want to make it very clear that this solution in regards to OneDrive is going to need to have the above performed at time of change. Given that WEM lacks the constant reprocess at the moment, if you switch locations, you are going to need to force it to reprocess again (Update: this does not appear to be a challenge from 1903 onward - changing the paths is honored and reprocessed). It will also not move the data, you could probably work out some logic within WEM itself to handle this with file copies etc – but that’s a post for another time.

Anyway, hopefully this can help some of you battling with the not so obvious (but extremely capable) settings required to address multi location requirements in a single configuration set scenario within WEM