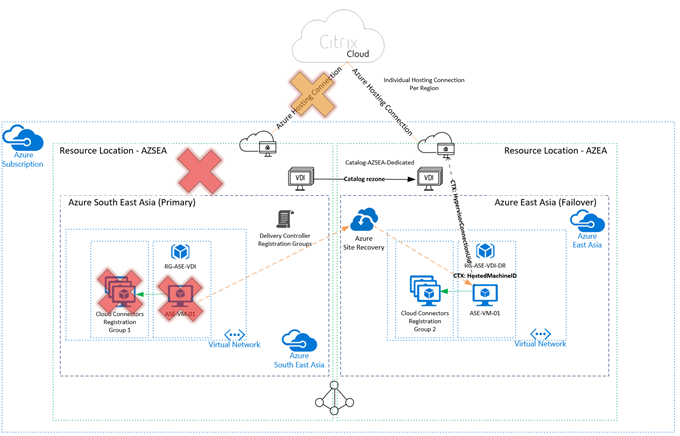 When deploying dedicated/persistent machines on the Microsoft Azure platform, it is often desirable to protect these workloads via ASR, providing cross-region failover capability. Chances are if you are a Citrix customer, you may be deploying both pooled and dedicated workloads via Citrix Machine Creation Services (MCS), which does not lend itself well to ASR capabilities, or several other Azure availability technologies (yet).

This post focuses on dedicated/persistent workloads deployed via MCS on Microsoft Azure. If you are deploying pooled workloads, ignore this article and simply deploy a secondary pooled catalog in your target (failover) region, ASR serves little to no purpose for you outside of maybe replicating your master image across regions.

My fellow CTP and all-round good fellow Neil Spellings and I discovered several considerations when dealing with ASR and Citrix workloads when consuming Citrix Cloud:

It is worth having a read through the Citrix Virtual Apps and Desktops Service on Azure tech zone article to wrap your head around considerations.

The long and short of MCS deployed workloads, is that you simply cannot successfully leverage ASR to protect VM’s and have them failed over to another region whilst keeping Citrix power management awareness in check. This is down to the fact that with MCS deployed workloads, the HostedMachineID and HypervisorConnectionUid attributes cannot be altered, which is what Citrix uses to identify the workload from a power management perspective. In Azure, this is identified by the Resource Group (in lower case I might add) that the machine resides in and the HypervisorConnectionUid. So whilst we can replicate the workload, and have it restored, we end up in a split-brain scenario where power management awareness proves immensely problematic (ASR also does not replicate the storage account which MCS uses to cache power management status etc. from Azure) and brokering does not occur appropriately.

MCS dedicated workloads are a “deploy once and leave alone” methodology from Citrix and as such, keeping the machines in an MCS catalog serves little to no purpose once deployed outside of some optimized power management calls to Azure. Given that MCS blocks our ability to leverage ASR appropriately, our first step is to boot MCS out of the way (thanks for the assist!) and leverage a “manual power managed” Catalog and Delivery Group. You may wish to continue to consume MCS provisioning to deploy the workloads from a central image, but post provisioning, it will be beneficial to move these workloads away from MCS management, and unlock some additional controls and capability that ASR offers.

You should ensure that if you leverage MCS to deploy your persistent VM’s, that you power on these machines at least once post provisioning. MCS leverages “on-demand” provisioning in Azure, so the VM does not actually exist until the first power on occurs (hence why dedicated workloads still use an identity disk on the first pass).

I have written a script here that actions the following:

What it does not do:

Once you have performed this migration, we unlock the ability to leverage Azure Site Recovery to protect these VM’s. There are still several considerations when dealing with failover scenarios, but I have a second script to cover this (read on).

Conversely, this script should also do the job with traditional on-premises deployments where you need to change hosting connection details such as a new VMware VCenter – but you would have to ensure you are running on a Delivery Controller and I haven’t tested it (no reason for it not to work).

Once you have a manual catalog and are protecting your dedicated workloads with ASR, you will need to think about the following:

I have a second script here which will perform the following:

My suggestion is to leverage the JSON input capability, as it will allow you to map out both your failover and failback scenarios in a controlled fashion.

With the above in place and executed, the following is entirely possible:

I took into consideration several scenarios whilst performing my testing, outlined below. There may be others, but these are the low hanging easy to test and document for now.

The following components are common across all models:

Here is the subscription outline in a happy state:

And here is what happens in a failure scenario, where we effectively lose the Azure South East Asia region:

Here is our second scenario in a fail state. Note that in this scenario, I needed to put the source (production) hosting connection into maintenance mode for sessions to launch.

Note that I have not been able to test this scenario in earnest due to limitations in my Azure lab capability. However, the model should work, and ASR restoration across subscriptions is supported.

This is focusing purely on brokering services and there are additional considerations such as profile management, user personalization layers etc. that need to be considered outside of ASR capability.

I hope the above helps when working through capabilities associated with Azure Site Recovery and Citrix Cloud-based Dedicated VDI workloads. The good folks at Citrix (you know who you are) have been very helpful in sharing knowledge around how MCS operates and considerations of it in Microsoft Azure. They are also working hard to bring in additional availability options to ensure that we can leverage the power and availability options associated with Microsoft Azure.