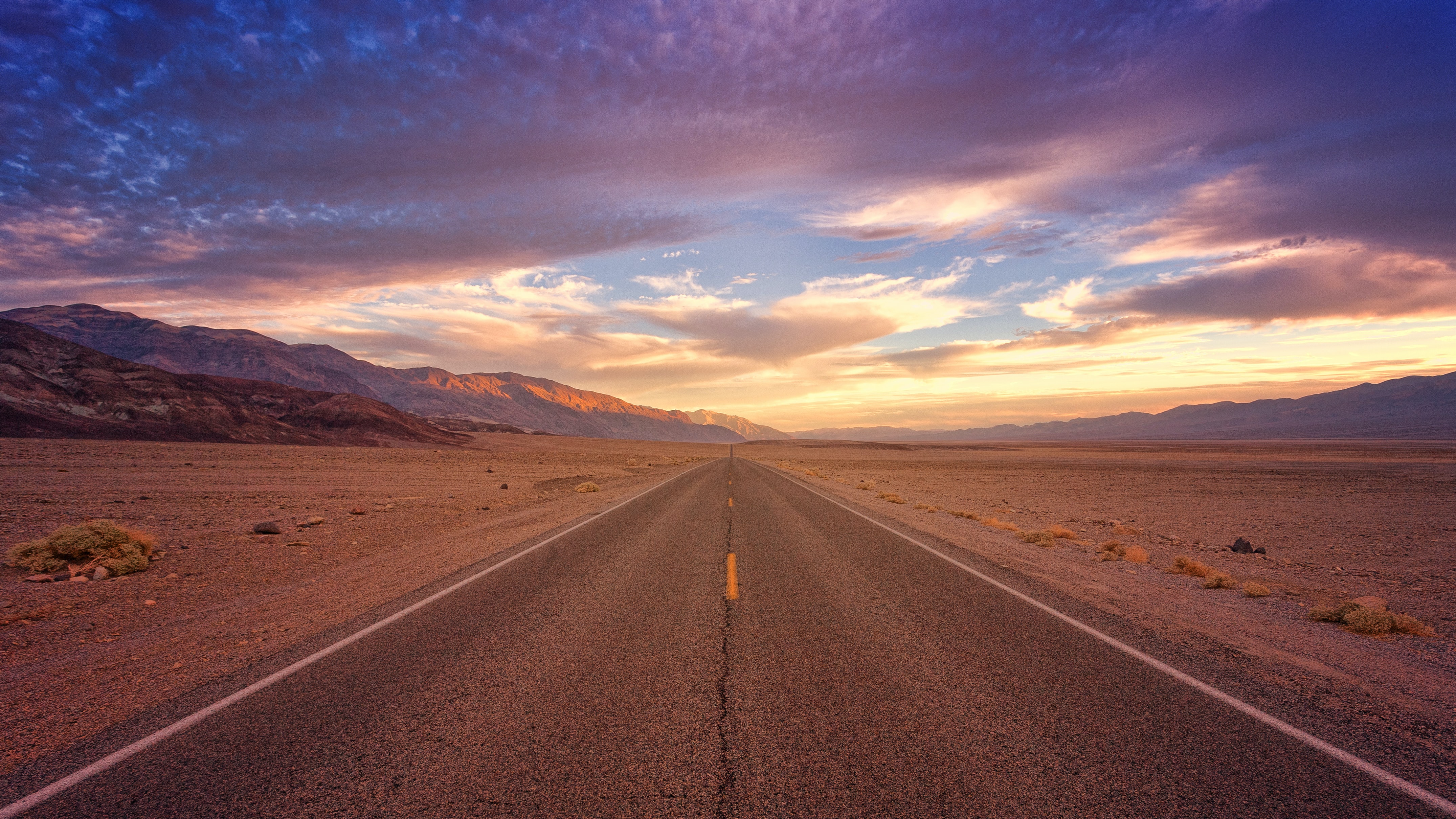 Anyone in our industry has at some point heard/been subject to the discussions of automating image builds for Citrix, VMware, AVD or any other virtual desktop solution in the market. It is not a new concept and has taken many flavors over the years, ranging from ConfigMgr deployments on-premises, to MDT frameworks provided by XenApp Blog and others, out to more agile modern build approaches such as Packer, Ansible and anything in between.

Automation can be a daunting concept, particularly for those that are not naturally “developer minded” like myself. I love scripting and automation, but I find it a challenge, and am amazed at some of the brains that can fly around different toolsets and develop capabilities on the fly. But automation doesn’t need to be a frightening concept and can take many forms, from basic to advanced. If we think about the why of automation when it comes to image builds, the tools become a secondary consideration and factor. My why is simply this:

Images support users. Users are important. Consistency is king, installing things is boring, and I am not always going to be the one that builds these images

To that end, I will suggest that anyone who executes anything in their images in a repeatable fashion, is already somewhere along the automation journey. Be it batch scripts, package deployents via PDQ Deply or MDT, copy and paste command line installs into PowerShell, or a one-liner chocolatey package, all of these are supporting consistency, repeatability, a complete disinterest in clicking buttons and laying an easily understood execution for the next person who steps in.

There are some key undisputable values of investing in some image automation methodologies:

This post is not one to bant on about you being wrong for not automating builds (you aren’t bad for not doing it), it is aimed to show some simple concepts (and some more advanced ones) learned on my journey across customers and builds. Maybe you will take some learnings, maybe you will think it’s rubbish - either way is fine.

A note to Aaron Parker, the man is awesome and all over this stuff. It was a pleasure to work with him over the years and see these ideas and concepts come to life. My brain is in constant awe of not just his ability to see a clear line through problems/challenges, but his willingness to explain and address them with grace and patience. He also has delightful hair. Just saying…

Before we dive in, here is a key takeaway that I think is important:

Each environment is different. Not every application is suited to always being the latest, and judgement should be applied accordingly. Just because you can pull down something from it’s source, doesn’t always mean you should.

One of the single biggest challenges with an always-latest methodology is that it is really unknown on what breaks what, and what works with who. One problematic application can result in a completely dead image, and with the automated latest approach frameworks noted below, outside of hosting the packages yourselves, there is no way to handle a specific version of an app. So be warned, and consider carefully.

I am building this post around a scenario I saw reguarly and I am sure resounds with some. However, the concepts are the same across almost any platform.

Frequency: Monthly at the worst - often fortnightly given the security landscape

This process is fine. In fact it’s great. But it is quite time consuming and if something fundamental needed to change (like an Operating System change) the whole process has to be taken care of again. And again. And again. Every month there is human interaction and configuration items that may just slide on in there and be lost forever more.

The Tooling to Automate the Process?

The above scenario is perfectly suited to an automated image build process, here is the tooling and some considerations around how I tackle it.

There are many flavors of tooling that can help with all levels of automation. What I chose may work for some, but there are plenty of other tools out there with all sorts of capability, a short list below just to identify some of the options and scope of capability:

What is Suited to “Always Latest”” and What is Not?

There are a range of considerations which apply to applications which make them candidates for an always latest methodology:

Here are some experience based opinions on what is suited to an always latest approach (and what may not) in a common image build:

Ultimately, we end up with a basic flow process that works as below: 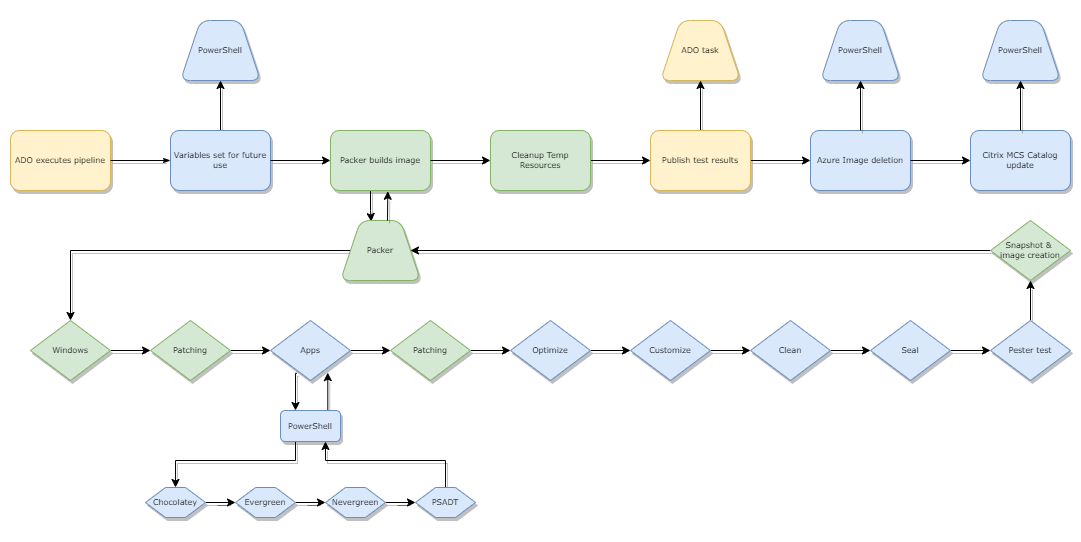 For the AVD side of things, I simply copied the pipeline (it’s YAML after all), and then altered the build jobs for what I did and didn’t want. 80% is the same, but I don’t care about snapshots and actually want to keep the Azure Image. I also don’t care about Citrix components in the AVD builds, so removed them.

I wrote a piece a long time ago about the User Environment and what goes where. I live by that logic today, and it aligns perfectly to this build process methodology. Configuration gets delivered post build by configuration tools, image build processes are simple and non complex.

For one deployment where we implemented this logic, the customer (wonderful folks) were already using DevOps pipelines for other processes with their LOB apps. They were able to implement (very very simply) an extension to their app build processes that pushed custom content into the appropriate storage account, which our image build then pulled down. This meant no double handling from anyone - the Apps team responsible for compiling and releasing code updates, could push their code knowing that Citrix and AVD images would pull that code, and the team responsible for the EUC images were zero touch.

Here be some learnings and things to watch for:

Azure DevOps offers an inbuilt, easy to use Wiki. I decided to use this for documentation and capturing processes for customer deployments. It left them with an easy to consume set of documentation that wasn’t tied to Microsoft word and lost in the pile of “everything else”. The wiki uses Markdown, so it is easy as pie to understand and update, and meant anyone in charge of pipeline alterations had no excuse to not update it and leave things out of date.

Martin Therkelsen wrote a very cool guide on how to leverage the Citrix Cloud DaaS APIs to automate image releases. This was something that opened up all sorts of fun and really brought value to automation engagements. To be able to not only build the image, but have it ready for testing all zero touch was pretty cool. Having a UAT/Test Catalog in Citrix DaaS was part of the process. We left production release flows out of the process for obvious reasons. But it is effectively the exact same flow.

Watch out when using the secure key from Citrix if you are a consultant. The key logs all DaaS events as the person who generated the key, not the key itself. So every time a Catalog is updated at 3 in the morning, it will appear as whoever generated the key is in there doing things.

This post is aimed to help with automation concepts and some thought provoking concepts. I have purposely refrained from posting “how to” guides because there are so many awesome examples out there already, and each environment will use a slightly different approach. I am happy to provide snippets or examples of anything should there be a need or interest - reach out if needed.

Importantly, I want to highlight some giants in the industry who have laid some awesome ground work for all of this stuff. In no specific order:

Enjoy the world of automation, it is far more rewarding thing clicking buttons over, and over and over again, and if my brain can get there, anyones can.